Thanks to Howard Carter’s discovery of King Tutankhamun’s tomb in 1922, there is no Pharaoh more well-known and well-loved than King Tut, the boy king , who died in 1323 BC at the age of 20. November 4, 2022, marks the 100th anniversary of the discovery of Tutankhamun’s tomb , an earth-shattering moment in archaeology! In celebration of this centennial, we are sharing 25 of the astonishing treasures found within his tomb.

Most spectacular of all the discoveries was, of course, the golden sarcophagus of Tutankhamen and the inlaid coffins, including one made of solid gold. Inside this nesting-doll-like assembly, rested the mummified body of the king himself. His death mask, also made of gold, has become the symbol of ancient Egyptian finery, and is considered one of the greatest works of art of the ancient world.

But among those well-known treasures were more than 5,000 precious artifacts in pristine condition. There were six chariots and all manner of weapons, shields, and daggers. There was also a wide array of furniture, much of it covered in gold and precious stones: two royal thrones, couches, chairs, ritual beds, and headrests.

There were chests containing priceless pieces of jewelry and beautiful clothing made of fine linen. There were jars containing rare perfumes, precious oils, and ointments. There were elaborate shrines to the gods, including one which hosted the Canopic jars that stored King Tut’s preserved internal organs.

There were musical instruments and writing implements, lamps, ostrich fans, and board games. There was food and as many as 30 bottles of wine. There were also 139 ebony, ivory, silver, and gold walking sticks. In short, every conceivable thing a young king may need in the next life could be found surrounding his body and sealed shut for eternity.

An ivory headrest with two recumbent lions. Photographed at the Discovery of King Tut exhibit at the Oregon Museum of Science and Industry in Portland, Oregon. ( Mary Harrsch / Flickr) The headrest was the ancient Egyptian equivalent of a pillow , and was designed to keep the head elevated during sleep. Golden throne found in Tutankhamun’s tomb. A scene from the daily life of the pharaoh is depicted on the front of the throne: the young Tutankhamun sits in a relaxed pose, while his wife Ankhesenamun rubs her husband’s shoulder with fragrance oils.

One of six chariots found in Tutankhamun’s tomb. These meticulously created reproductions were photographed at The Discovery of King Tut” exhibition in New York City. ( Mary Harrsch / Flickr)

The Anubis Shrine was found guarding the entrance of Tutankhamun’s tomb. An Anubis statue sits atop a trapezoidal altar made of gilded wood. Egyptian Museum, Cairo. Makeup box in the shape of an ankh from King Tutankhamun’s tomb. Photographed at The Discovery of King Tut exhibition in New York City. 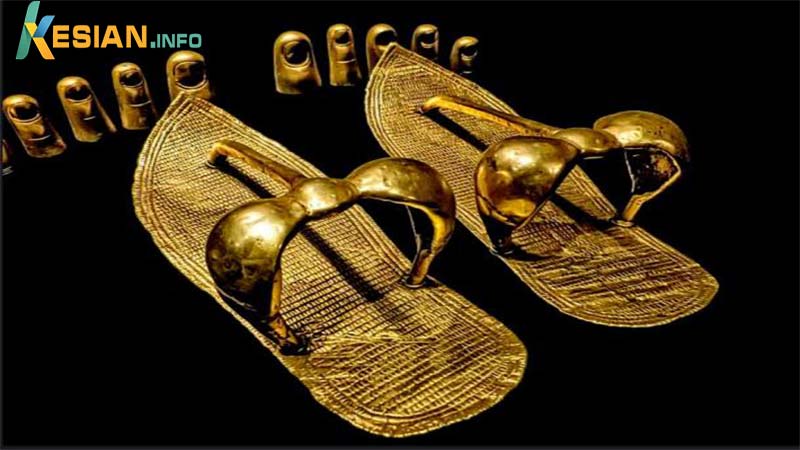